Adobe Experience Manager 6.5 General Availability was announced April 9th, 2 weeks after Summit, continuing its momentum from last year of an early release. Aside from the expected Adobe.com domain already being live on the latest version, they touted a couple of other companies already being on AEM 6.5, though they were not named for privacy purposes. It would seem that the product is much more stable than in years past, which is exciting for users of the product and Adobe themselves, as they are encouraging people to upgrade as soon as possible rather than - as both Joey and I have encouraged in the past - waiting for the first service pack to drop.

Like years past, I attended the session at Adobe Summit 2019 where Cedric Huesler, Director Product Management AEM Sites, went through the expected features to be released for AEM 6.5. In previous years Cedric would share 10 new things. That didn’t happen this time; the session this year was titled “Adobe Experience Manager Sites: Top Innovations”. Cedric was joined by Haresh Kumar, Director Strategy & Product Marketing for AEM. Let’s go through each item that they reviewed, and then I’ll have a couple more items at the end that you should be aware of that were not presented in this session.

The process to upgrade Adobe Experience Manager can be long and painful. Especially if you need to customize portions of it or build your own unique components. And that happens all the time, to accomplish unique business requirements or because people just don’t know what they are doing. Last year Adobe introduced Cloud Manager for Adobe Managed Services customers, which would help to streamline the process of deploying new code to your Production environment. Now within Cloud Manager you can start the upgrade process to 6.5. They provide a step by step process. This helps you to get your infrastructure ready for upgrade.

What many might not know is that Cloud Manager has been on a monthly release since mid last year. This new work is slated to roll out in the May release for Cloud Manager. Again, this is only for Adobe Managed Services customers.

A lot of development nowadays is being built using Single Page Applications (SPA’s). AEM is no different, despite the many tools already built into its system. The problem is that it puts content back into the hands of developers, instead of marketers. Adobe has developed a new SPA editor that will allow content authors the ability to continue to do their editing within the traditional AEM interface and still gain the benefit of developing with an SPA. For now the only frameworks that are aligned to work with AEM are Angular and React, but there is an SDK or a new maven archetype that will help you. If you want to get started with this then I recommend the tutorial provided by Adobe for SPA’s. My company was part of the BETA program for this last year and it has been nice to see this come along and be part of AEM.

No idea what the point of this one was. They acknowledged that SEO was an issue with SPA’s. The content isn’t actually on the page, or more accurately isn’t in the source of the page. Which means that Search Engines can’t read them and thus the page can’t fulfill its mission of being an SEO superstar. It’s a real problem. Their response was that this should be solved some time in the future. Good to know.

The other issue they brought up was that the first load of the SPA can take a long time. Their answer for this is to render the code for the SPA on the server rather than at the browser level.

I used to harp pretty strongly on the fact that the Touch UI did not have an equivalent to Scaffolding in the Classic UI. Last year they announced that Content Fragments editor would be the method to accomplish such structured content. This will become extremely important when you think about omni-channel content powered by AEM Content Services. Their new HTTP API’s will allow content to come in from a third party source into the DAM as a Content Fragment and then for it to be consumed to display on the front end. So AEM can really be that central source of truth for your content, if you want it to. That’s a good improvement.

Many AEM Assets customers have experienced a high degree of frustration attempting to integrate their AEM Assets implementations with their Creative Cloud applications. The inability of a creative user to readily browse the AEM DAM and re-use those assets without having the leave their Creative applications such as Photoshop, Illustrator, or InDesign, has finally been addressed by adding Asset Link, which provides an AEM integration point and a Creative Cloud custom “panel”, allowing the creative users to see their entire AEM DAM in-place in their Creative suite.

The integration with Magento is just in its infancy right now because the acquisition was so recent. But down the road it could be great. Magento is going to be very useful at managing your products/SKU’s. Now you can virtually represent your SKU’s in AEM from Magento. It uses GraphQL to accomplish it. This is the first combination of these two solutions. I look forward to more.

Core Components certainly isn’t new. But it has been expanded upon and some new components have been added. It’s nice to see that they are continuing to iterate on this. Using the Core Components is the better approach for your AEM implementations. Especially if you can pair them with the Style System and Editable Templates. I recommend you check out the Dexter session from Summit where Adobe talks about how they followed this example for their own sites. If you need help getting started then I recommend you check out the WKND tutorial provided by Adobe that will walk you through the way to do this or you can the Adobe Docs page about Core Components. Something to note is that there is a library for front end developers that will give them a leg up on working with the Core Components. Eventually you will be able to add your own Themes to that library. That could be pretty helpful for organizations.

How can you get more content in front of people? AEM Screens, of course. There is a now a tool within AEM Screens that allows you to have content get updated across your various Screens in real time. Their example was showing restaurant availability based on data that was updated in real time through an exposed API of datal It was interesting, but if you aren’t using Screens then this was kind of useless.

As I mentioned there are a few other items not included in the Sites session that are worth mentioning for AEM 6.5 that Sites people will be interested in knowing about.

AEM 6.5 will run on Java 8 OR Java 11. As many of you may be aware Oracle no longer provides public updates for JDK 8. Java 11 will be free, but in the AEM world only works with AEM 6.5. So if you are on an older version of AEM then you are stuck using JDK 8. Adobe has said that anyone that is still using JDK 8 is going to be covered by Adobe license agreement with Oracle. Not as though you needed it, but this is another reason to upgrade to the latest version of AEM. For a more in depth description please refer to the Oracle Java support doc Adobe put out. 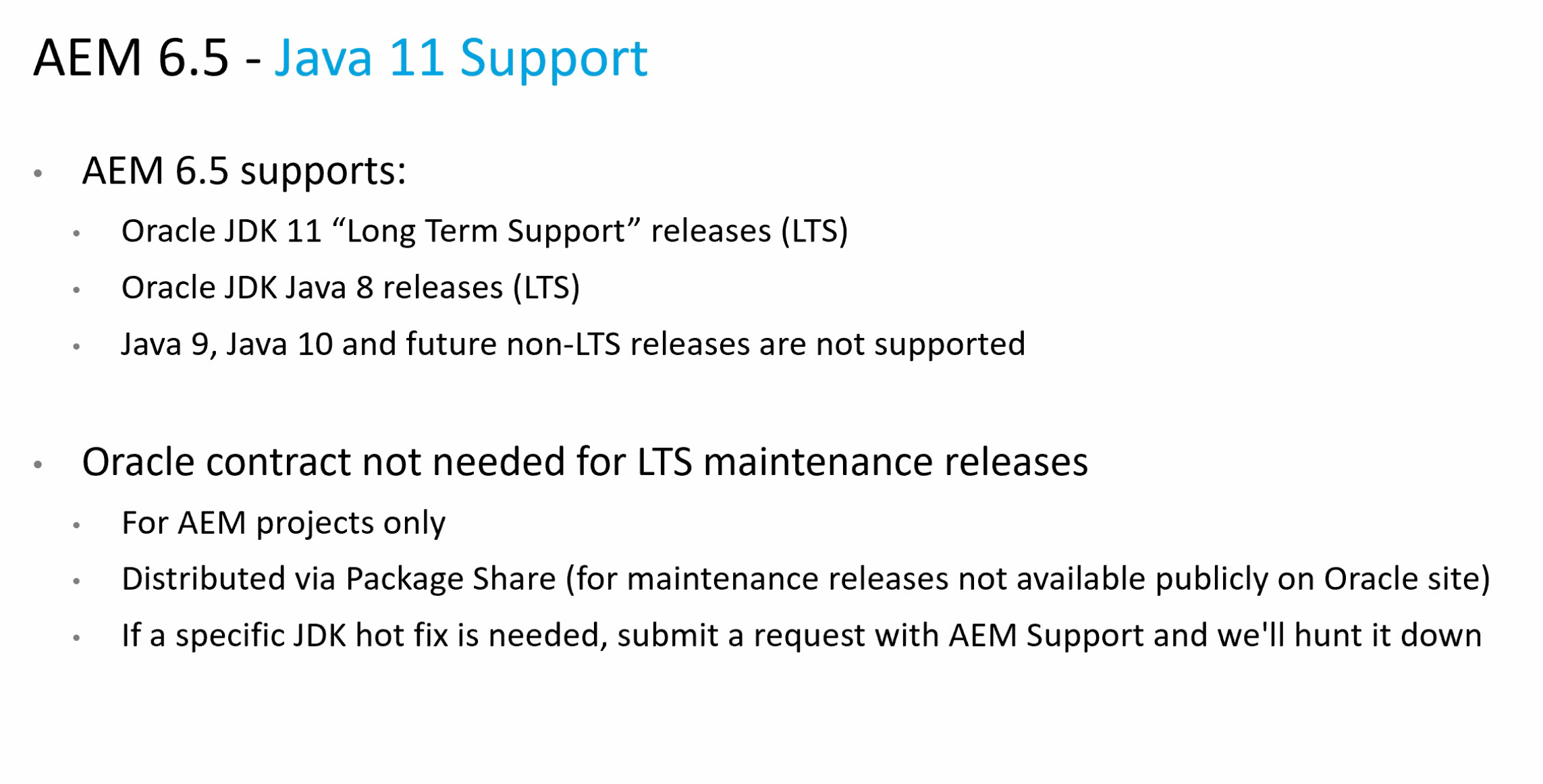 One of the last remaining items that still needed to be migrated to the Touch UI was the Permissions system for Users and Groups. No longer will you have a completed disconnected process of creating users/groups in one interface and permissions in another. It’s probably one of the reasons why Adobe couldn’t get rid of the Classic UI last year and still had to provide support for it. Do I like it? I’m not sure. I wasn’t overwhelmed by it. But rather than take my word for it, I’ll get someone else more familiar with the permissioning process in AEM to comment.

And last but by no means least, the Classic UI is still available in 6.5. This is a little surprising since they were talking pretty heavily about getting rid of it for this release. Use it if you want to but don’t expect support for it from Adobe. You should absolutely stop using the Classic UI. But you don’t have to take my word for it, listen to this guy.

If I am very honest, I was a bit let down by the AEM Sites session this year at Adobe Summit 2019. It is starting to feel like maybe Adobe is running out of ways to innovate AEM. While not everything can be flashy new features all the time, the momentum just seems to be slowing down. Security advancements and documentation are good but not sexy. They should consider bringing all these items in under one session in the future if they are just going to be cherry-picking from various capabilities within AEM. Then they can just call it Adobe Experience Manager Innovations, rather than having separate sessions for Sites, Assets, and Screens. Maybe with the recent acquisition of Magento there will be new areas of integration with it. We’ll see. For another opinion on the release of AEM 6.5, I recommend you check out Tad Reeves article. Joey will also eventually get his own write up for AEM 6.5 Assets.

Follow @AEM_hq to get notified when new posts go live!